Job #11 - What is it like to be a sports photographer at Charlton Athletic FC? 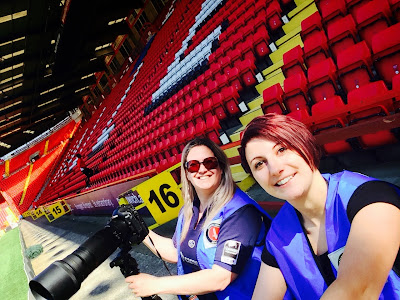 Job #11 was a sports photographer. For those of you that don't know me I have worked as a photographer as one of my actual jobs in the past - both golf and weddings (rather different I know!). Kelly is the Academy photographer for Charlton Athletic and contacted me asking if would like to come and photograph a football match with her. As you can imagine I jumped at the chance to go back to my roots whilst also trying something new. If I'm honest I hadn't anticipated how different it would be to golf photography. Golf although their arms are moving fast the rest of them stays on the spot! Football however not only have you got to follow a very fast paced match through the lens of a camera, you also have other factors that I hadn't considered - 1) the football moves even faster than the players and really needs to be in most shots for them to be any good 2) there are 23 people running around the pitch plus the subs running up and down the side of the pitch to warm up - which means someone is likely to stand in front of the shot you want to get! 3) the stadiums cause shadows and light differences which can really upset the camera, i.e if your in the shade photographing a player in the light the camera gets a bit confused!
There are specific rules about where you can and can't sit to take photos, big matches it's usually either end of the pitch (so your out of the way of the linesman), and you can't move from your spot once you have chosen it! (Which is why they have such humongous lenses, keep it clean now!) Apparently at a premiership match for a team such as Arsenal for example, there would be around 80 photographers! I couldn't believe it, how do they fit them all in! We photographed a Charlton Athletic under 21s match, so the rules are a little more relaxed, plus there were only 4 photographers there! but obviously there are spots that are better than others, so you have to make sure you beat everyone else to it! 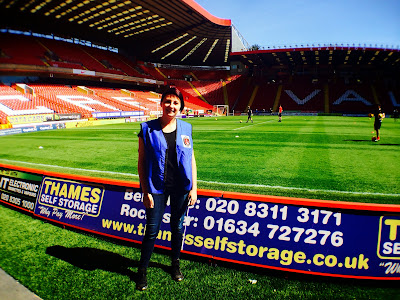 I also didn't realise that there are different types of football photographers (yes there was a lot I didn't know!), so Kelly is the photographer for Charlton Athletics' Academy section - so obviously we were only interested in getting photos where Charlton look good! Where as Alan is an agency photographer, which means he either will only get paid if his images are used or in this case he was paid to go by the opposing team so had to get photos where they look good!


It's strange as you can get the most incredible shot of a player in mid air or a great tackle, but usually the main pictures that are published in the newspapers are of the celebration when a goal is scored - not the most exciting shot for a photographer!
I wondered how agency photographers managed to sell their photos when there are 80 of them at the same game getting fairly similar pictures. Agency photographers will have a device attached to their camera that will automatically download images to their laptop without them doing anything. They then have to try and edit photos with one eye whilst watching the game with the other to ensure they don't miss any crucial pictures...pretty tricky I can imagine! Maybe they end up cross eyed after a few years! I also wondered whether wrinkly eyes might be a  hazard of the profession as you have to squint for the whole match to look through the camera - Kelly assured me that after a while you learn to be able to look through the camera without closing one eye! Phew! Anyway I got off track, so basically the reason they edit the photos as they go is because everything has to be so instant now with social media that simply the faster you send in your pictures to the agency the more likely they are to be used!

Club photography appears to be a lot more laid back, and we were able to edit our photos in the sunshine! I would like to add at this point that the photographs in this blog have been used with the very kind permission of Charlton Athletic FC and were taken by yours truly! 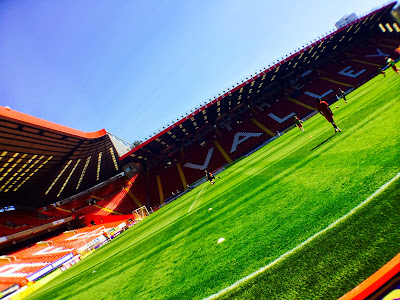 Anyway so we were given blue Charlton bibs to wear on arrival to show that we are official photographers - pretty cool! We then went to the press lounge (I know, how awesome is that!) which is a glass walled room full of work tops to allow photographers to continue to work before or after the game - I can imagine the atmosphere is buzzing at a big match! We then went through the warren of walkways which lead us pitch side, very impressive. I felt so tiny in the huge stadium, the feeling as a player with the crowd cheering you on must be amazing! We chatted with a few of the players, who were all really lovely. Their all a fan of Kelly and regularly tweet her after a match to find out where their photos are, I don't think they have heard the phrase patience is a virtue ;-)

When photographing the second half we were literally sitting behind the adverts around the pitch. I'm not going to lie I was rather concerned about getting a football in the face, Kelly said she's only been hit twice - great! I am pleased to tell you that I wasn't hit by a ball, although I'm sure you'd all enjoy reading about it...sorry to disappoint!

After the match we waited around in case we were able to get pictures of the managers interview, unfortunately we weren't this time. We then packed away all the equipment (there's a lot, some photographers even have a couple of cameras so that they have different lenses available depending how close they players are), and headed outside. There was a pretty impressive coach pulling away to take the other team home, unfortunately I didn't get a closer look!

Overall I absolutely loved the day sitting in the sunshine, doing the things I love best - taking photos, learning new skills and being challenged! I would definitely love to go again with Kelly to give it another go if she'd have me (I only managed to get 7 photos that could be used, but I think that's pretty good for a first attempt!). I don't think I'd do this as my full time job as I think you have to be a real sports fanatic, which whilst I love the atmosphere of going to games - I know nothing about sport! It's a lot of work, and a lot of pressure if you want to earn a lot of money doing it. Alan was going to another 2 matches that day! 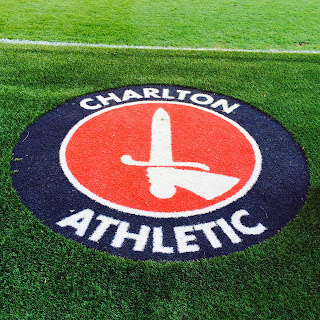 So I asked Kelly to give a post match analysis on what it's really like to be a sports photographer...

1. How long have you worked in your job and how did you get into it?
I've been in Sports Photography properly for nearly 6 years. I started by taking photos for a Sunday League football team in Charlton. It was from there that I built up my experience before approaching Charlton Athletic to shadow their club photographer, Tony. Then the guy who was shooting for the Academy was stepping back from it so I thought I'd give it a shot (that was a terrible pun!).

2. What's the best thing about your job?
The best thing is the variety. It's a different game every match and the players are all a really good bunch of lads. It's so good to see them getting called up to the first team to play. And watching the U18s win the Development League 2 South and then national title and then the U21s winning the Kent Senior Cup at Gillingham 2 weeks ago was brilliant.

3. What's the worst thing about your job?
The worst thing I think is the weather. It's not a lot of fun sitting in torrential rain for 2 hours. But the pros definitely outweigh the cons.

4. If money, time, education etc were no object what would your dream job be?
I would definitely love to stay doing sports photography but also travel photography too.

5. What stress rating would you give your job (where one is super relaxed and 5 is super stressful)
Stress rating? Well I'm also a Charlton fan so this season with its ups and downs would probably say it's a 5 haha.

If you are interested the match was Charlton Athletic U21s v Brentford U21s and the final score was 1-1, Mikhail Kennedy scored for Charlton. Thank you for having me Charlton Athletic, and thank you for contacting me Kelly - it's so kind when people contact me to offer me the opportunity to work with them as I know it's not easy having someone there who has no idea what their doing!
If you would like to see Kelly's work visit http://www.scarletblackimages.co.uk/

And if you would like to donate to the amazing cause that this is all in aid of then please visit http://www.100jobchallenge.co.uk/#!donate/c1n0m
Posted by 100JobChallenge at 05:54