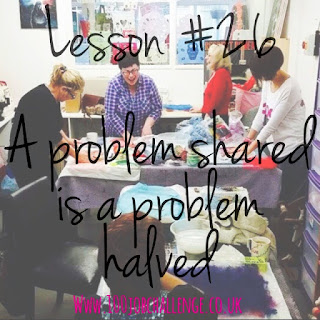 Job #26 (woo hoo I'm over a quarter of the way through!) was working at a craft centre. It's really the lady that runs it and the people who go to it that make this place the crafting wonderland that it is!

I'll start off by explaining a bit about the company. It is a community interest company, so is almost a charity but not quite! The company is called Unravel & Unwind and is held in a wonderful space called Intra which just oozes art appeal everywhere you look! There is another artist who is also based in this space and it is just magical. Unravel & Unwind hold 'drop ins' 6 days a week - which they are hoping to extend to 7. There are numerous craft sessions that people can come along to. You don't have to have any previous knowledge and can even just come along for a chat without joining in if that's what you need! Sometimes they are directed by an expert, and sometimes they are like the session that I attended today where is it a learn as you go format so everyone is teaching each other which is great! The company formed very organically and Faye very much wants it to continue that way. There were a couple of volunteers there today who were coming up with new classes that they would like to run. Faye wants it to be a real community project, so goes with the flow when it comes to new classes. The felting class that I attended today is once a month and started in January as it was something a couple of people fancied giving a go - they watched a YouTube video and away they went! It's an absolute bargain too, for just £7 people can come along for the day, and all materials are provided. I should add that all the materials that Faye sources are made by local suppliers to continue with the community theme. People also have the chance to display their work, quite a few have had their pieces sell too!

Felting was so much fun and something I hadn't even heard of! It's very therapeutic, and we had great fun experimenting and seeing what we ended up with! I can't wait to go back and try some more classes and learn some new skills!

The most amazing part of Unravel & Unwind however has to be Faye who runs it! She suffers with a condition called Fibromyalgia among many other things. This is a very difficult thing to live with, and left her unable to work. This is how Unravel & Unwind was created, a business doing what she loves on her own terms! Unfortunately companies aren't too quick to hire people with invisible conditions like ours and in a way I can't blame them as our bodies can be pretty unreliable at times. For those of you that don't know much about Fibro, the body is in extreme amounts of pain and gets tired very easily along with head fog and a multitude of other symptoms. You would think this would make it pretty impossible to run a business, but with an extreme amount of determination Faye is a shining light to all of us to show that anything is possible if you set your mind to it. Pretty much everyone that attends the sessions at Unravel & Unwind has an invisible condition of some kind or another - although it's not a requirement! It creates a wonderful place for people to come and socialise without worrying about the affects of their condition. Every person in the room today suffers with memory loss, so it was completely acceptable that we didn't know each other names, how we take our tea or what we were even doing there! It's a great deal of pressure that we put on ourselves in the outside world to seem 'normal' but faye has created a safe environment where we can be our own kind of normal with no need to worry about being seen as rude or feeling judged. There were even two people there with MVBD too! It always makes me so sad to hear people's stories about invisible illness, but it also gives me the determination to carry on the struggle to find a way to overcome these things. Each and every person there today was a true inspiration, I can appreciate the struggle that it would have been for them to come along today. What a fantastic project, it really is a magic that needs to be experienced to be appreciated as it is impossible to put into words. Invisible illness can be so isolating and what Faye has done is create somewhere that people can go and for a few hours can feel completely understood.

This has definitely gone into my top 3 on the job list so far! What an incredible job helping the community whilst helping your health, being creative and helping others at the same time...I really don't know what more you could ask for from a job than that!

I asked Faye a few questions to unravel (see what I did there!) what it's like to run a craft centre, here's what she had to say:

1. How long have you worked in your job and how did you get into it?
I've been working on Unravel & Unwind CIC since December 2013, with the studio space opening in March 2014. The job found me, I had been having visions of it while I was unemployed and recovering from the last serious cfs/me/fibro flare that caused me to become unemployed. I had started to teach myself to crochet as part of my personal healing and was having no joy in finding employment. So with the help of the job centre I built my own job.

2. What's the best thing about your job?
I love being able to be creative in the company of like minded people. Sharing skills, knowledge and ideas is just touching the surface of what I love. Everyone I interact with have their own story to tell, but the common factor is that many suffer from hidden illnesses such as depression or fibromyalgia, and all any of us want is to spend time with people who understand while crafting. For some reason, while we are being creative we don't "feel" our illnesses and we feel "normal" for a while.

3. What's the worst thing about your job?
The paperwork - I deal with all the bookings, accounts, social media and the end of year tax returns. This takes up a fair chunk of the working week, but hey if it's gets too much I just turn my back on the computer and get back to crafting 😊

4. If money, time, education etc were no object what would your dream job be?
I'm going to be truly honest and tell you that I am in my dream job. I just need more hours in the day and more energy to do all the different types of arts & crafts that I want to try.

5. What stress rating would you give your job (where one is super relaxed and 5 is super stressful)
Most of the time it's 1. I only reach a 5 when I'm working out the accounts.

Thank you so much for letting me come along to experience your wonderful centre! If you too would like to Unravel & Unwind (what a great metaphor!) then visit www.unravelandunwind.co.uk 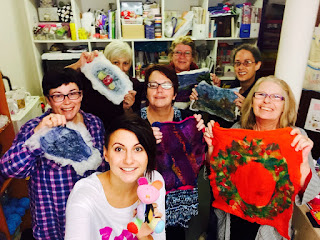 If you would like to sponsor me on my challenge by donating to the wonderful charity that is The Meditation Trust & their project researching the impact of Transcendental Meditation with helping people (particularly soldiers) to overcome Post Traumatic Stress Disorder then please visit: http://www.100jobchallenge.co.uk/donate
Posted by 100JobChallenge at 06:33