The 100 Job Challenge is back

I am sat here writing this with absolutely no idea what to say, but I'm going to carry on typing until I do! (I bet at this point you're really glad you clicked the link to read this! - I am very grateful that you did though, so thank you!). Basically this challenge is my baby, I came up with this crazy idea about 4 years ago, and even though almost everyone that I told about it thought it was a ridiculous idea, I went ahead and did it anyway. It turned out that people actually thought it was a pretty cool idea and donated lots and really got involved. I was even on national TV talking about the challenge 'my brilliant idea' and the condition (I should add it was a tiny channel that has since shut down! But still it was a huge achievement!). I just tried to find the link in case you wanted to check it out, but apparently they have even been removed from YouTube! You'll just have to take my word for it...so here's a still of it instead! Also in case you haven't been following me, that's Stich the challenge mascot, that I made for one of my jobs (I don't usually go everywhere with a teddy...honest!). 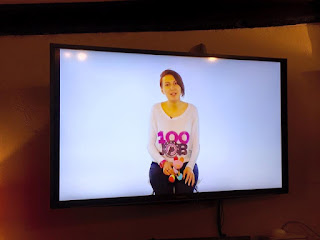 If you followed this challenge from the start, then I'm sure that you will know that it all started because I developed a rare condition called a Migraine Variant Balance Disorder...something which even doctors hadn't heard of! (which was really helpful!). I won't go into all the details, but if you're interested I have earlier blogs about it - so check them out! In a nut shell this meant that I couldn't work, and trying my best to turn a horrible situation into a good one I decided to focus on the things that I could control instead of the things that I couldn't. The things I couldn't control were the condition itself, or the fact that I couldn't work. But the things that I could control was how I reacted to it, so I decided that if I could no longer do the jobs that I had done previously - then I would explore what jobs could I do (by trying 100 of them!).

I was also pretty upset that I hadn't been able to do any charity work either. My job pre MVBD had been for a charity. I also tried to do one fundraiser a year to raise money for Cancer Research UK - I did quite a few 5k runs, a half marathon (with zero training which I definitely wouldn't advise!!) it started at about 11pm and I had a Nando's just before heading for the start line - which funnily enough I don't think you will find recommended in any blogs about how to prepare for a half marathon, and for good reason! Basically by the end I was seriously weighing up whether to pass out in a bush or finish the race. I'm pleased to say that I chose the latter! I also did a skydive which I loved, but was slightly terrified as my boyfriend at the time said he wouldn't come and watch in case I died...great way to help calm the nerves babe! (I should point out that he had a serious phobia of heights so the thought of me throwing myself out of a plane was the most ridiculous idea he'd ever heard - although come to think of it, I think a lot of people would share that view even if they didn't have a phobia of heights!). Anyway where am I going with this! Well because my head felt like it was mostly in space and no longer attached to my body I couldn't do these kinds of things any more. Which is why I decided that whilst I hoped the 100 job challenge would help me to learn about this new me who possessed (lets try and keep this positive, and say...) limited skills compared to the old me. I figured I made up the challenge, so I could make up the rules too! So I decided that it would also be to raise money for charity - win win.

Fast forward and I have done 37 jobs to date....although only 2 jobs in the last 2 years, which I have battled with in my mind because I am not the best at putting my health first. That part of this learning about how to be the new me has certainly been an interesting one. Naturally I am someone that always pushes myself to do everything to the best that I can, which I have done - but my best now doesn't really measure up to my standards of what my best SHOULD be. I am a massive shoulder by the way, my life coach even told me so! I have been trying to convert from a shoulder to a coulder (those of you who have delved into self help books should know what I mean...see I do it without realising, I'm shoulding again!) and for those that don't, it means I have been trying to rephrase things in my mind from I should do them to I could do them, the idea being it reduces my expectations of myself. So unfortunately the 100 job challenge took a back seat as I got myself back into paid work, and my health wouldn't allow me to do both. Me being me, I then stepped it up a gear and am now doing a full time psychology degree (with the small ambition of hoping to cure MVBD, and get my memory back...more about uni life with a lack of memory another day!), whilst also working and trying to stay well - which has not been easy! My life coach had some other wise words for me...you can do anything but not everything. I have really missed my challenge, so I gave myself a good talking to (not out loud don't worry), and asked myself - what things are most important to me? You might think that being someone who's intrigued by anything and everything is a great way to be (and I wouldn't change it), but it certainly poses difficulties, especially as I have less energy than some these days.  My 100 job challenge is pretty far up the list of what's important to me, so I have tried to restructure things to fit it into my life again.

Something else that I have learnt on my journey is that baby steps are key, I am notorious for setting these huge goals and making things difficult for myself! So I've started off by messaging a few places about seeing if I could go along for the day (FYI working as a dementia researcher looks like it will be the next job on the list). Next was to start an Instagram account which apparently I had already done and forgotten about - so that one was easy! Although I clearly didn't tell anyone about it because I currently only have one follower...me!! It would be amazing if I could have some followers other than myself...so I'd be super grateful for you to have a little peak next time you're on insta! @100jobchallenge.

Next on the list was a bit more tricky - another random and annoying aspect of this condition is that I now get overwhelmed quite easily. I have got quite a few notes about jobs I've completed that I have written on my phone but that I haven't yet edited and transferred into actual blog posts, the thought of that put me off writing anything at all. Today I decided that it's ok that it's not perfect and not totally up to date - I just need to break that fear by writing one blog....even though I had nothing to write about! I'm actually pretty pleased that it appeared I did have something to write about, woo! So if you've made it to here without getting bored then thank you so much for being part of my huge step of overcoming my overwhelm (good job I'm writing this and not saying it as that's a bit of a tongue twister!), seriously though, I'm super grateful. It's interesting (or frustrating...potato, potatoe) because I started my previous job as a volunteer, and quickly worked my way into a paid role and (I can't remember what word I want right now, hi MVBD. If you could see me now, I'm acting it out trying to get my brain to remember!) ah that's it progressed!...woo hoo I'm making progress ;) because of my rather good organisational abilities. The downside to being super organised is you get given more and more work to do! About a year before I was diagnosed, my work that I would usually find really easy suddenly became really difficult and started to pile up all around me. I would put it off and put it off until my boss sat down with me and worked through it with me (I was so lucky to have such an awesome boss, I had to pay for my life coach to do that with me for everyday life stuff!). It wasn't until I was diagnosed that it all made sense, I was told that was one of the many random symptoms of MVBD...whoever said a migraine is just a headache really has no idea! Trust me to get something so weird!

So anyway I think I've taken up enough of your time with my ramblings, what I really wanted to say was please share my challenge as I am starting it again! wooo! And keep your eye out for future blogs (so apparently I could have said this whole post in less than 3 lines...soz about that!). I'd love you to spread the word, and definitely get in touch if you have a job that I can do for the day - even if you think you have a boring job, I can assure you I will find it interesting!

Again thank you so much for your support, and for taking the time out of your day to read this. We'll speak again soon!